SculpSure and CoolSculpting are the top two Non-Surgical fat reduction technologies in the world today. New Radiance is the top SculpSure facility in the Southeast United States because we do SculpSure better. Our Advanced SculpSure Protocol utilizes additional devices such as ZWave acoustic wave therapy and Vanquish ME RF which are provided to you absolutely Free to enhance results and have you seeing a slimmer shapelier you in less time.

New CoolSculpting is also available at New Radiance so you can get the best treatment for you!

Recently CoolSculpting was purchased by Allergan, the same company who makes Botox, Juvederm and many of the world’s top medical devices. CoolSculpting has made huge advancements in technology and now treatment times are half of what they used to be.

CoolSculpting has now developed new  handpiece technology which provides more uniform cooling of the area treated. Older handpieces had cooling elements only on the sides of the handpiece cup but the newer has cooling throughout. What does this do to change the treatments is not only lowers the treatment time from 1 hour to 35 minutes but it also translate into a much more comfortable treatment because there is less pulling in of the tissues. For this reason post treatment
discomfort is also less.

With the addition of CoolAdvantage technology and the Zimmer Z Wave, Coolsculpting treatment times are almost cut in half, treatments are more
comfortable (during and after), and most importantly, the procedure is significantly more efficacious.

So now at New Radiance you can come in and see what best for you, SculpSure or CoolSculpting.

The SculpSure vs CoolSculpting Comparison:

HOW SCULPSURE HELPS YOU LOSE FAT

Here are the Benefits You Get with Each SculpSure Treatment… 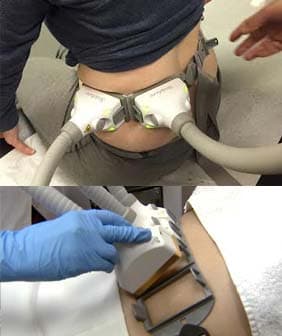 WATCH THESE VIDEOS TO
SEE WHAT

MORE SCULPSURE BEFORE AND AFTERS*

*As with all medical procedures your individual results may vary.

Who Is A Candidate For SculpSure

Ideal candidates for the SculpSure have extra fat on their abdomen, love handles or other areas and are not obese. SculpSure™ is especially helpful when the fat bulge cannot be reduced by diet and exercise.

We always recommend you request a free consultation to discuss what the best option is for your body.

How Does SculpSure Work?

The SculpSure™ device is a laser. The laser heats the underlying fat until many of the fat cells die which the body then disposes of through the lymphatic system.

What sets SculpSure apart from other treatments is that SculpSure dies NOT Shrink Fat Cells it destroys them. The beauty of this procedure is that it is completely non-invasive and non-surgical.

*As with all medical procedures your individual results may vary.

How many SculpSure™ treatments will I need to get results?

Many patients will see improvement in one SculpSure™ treatment. And while some patients will choose to do a second treatment to remove additional fat. Our experts will always be available to help you choose the best treatment plan for your body. 1*

How Much Fat Will SculpSure Remove?

The SculpSure treatment has set the new standard with the greatest number of body contouring benefits of any fat reduction treatment. It has been clinically proven to non-surgically reduce the amount of fat in treated areas with just one 25 minute treatment.1 SculpSure is the most convenient method for busy patients who want an effective treatment that won’t disrupt everyday life. Because SculpSure is completely non-invasive, improving problem areas is quick and easy—everything patients want in a body contouring procedure.*

Currently, SculpSure™ has been approved for use on common problem areas for both men and women including the flanks and abdomen. In addition to the fat reduction provided by SculpSure, the laser used can aid in firming and tightening the skin. SculpSure is a laser treatment appropriate for all skin types. The patients satisfaction rate is more than 90%.*

CLICK HERE FOR MORE FDA CLINICAL TRIALS INFORMATION
*As with all medical procedures your individual results may vary.

Is the SculpSure Procedure Painful?

SculpSure™ is not painful. Most patients feel a warm tingling sensation throughout the treatment which was well-tolerated during clinical procedures during FDA approval.2*

The secret to losing fat without pain lies in the patented cooling technology in each SculpSure™ applicator, the laser will only target your fat cells and keep your skin cool while helping you lose the fat.*

If you are considering CoolSculpting™ please read the posts on www.realself.com’s CoolSculpting forum first. They include many statements like “None of the doctors I spoke with told me how excruciatingly painful the recovery [from CoolSculpting™] is. Everyone talks about the ‘mild discomfort’ for the first 10 minutes of the procedure till you get numb. Yeah but guess what, when you get un-numb after 3 days, your nerves have gone haywire and are firing off at random.”

With SculpSure™ you will be comfortable before & after your treatment!2*

SculpSure™ is FDA approved and was found to be safe for your body. 2

It is non-invasive, which means that you can lose fat without surgeries like liposuction. In our office, only top experts perform SculpSure™ procedures. They have extensive experience with non-invasive fat reduction and will do a complete consultation with you before your treatment. We will need to make sure that you are a good candidate for the SculpSure™ procedure and to ensure you get the best results.*

Not all Procedures allow the FDA to direct their clinical trials, Cynosure the maker of SculpSure is the largest medical laser company in the world and opted for this approach to ensure patient comfort and safety.*

Instead of Diet and Exercise Can I Just Get SculpSure?

SculpSure™ is an amazing, safe and pain-free way to lose fat, however you cannot replace your diet and exercise routine with SculpSure™ treatments. This is because SculpSure will help you lose stubborn fat without surgery, but to remove more than 1 liter of fat Smart Liposuction with Dr. Neil C. Goodman is recommended. With Smart Liposuction you will be able to lose up to 4 Liters of fat in 1 procedure*

SculpSure™ is designed to help you lose the fat that is difficult to lose with exercise. So when you make SculpSure™ a part of your life, you will see even better results when you continue your diet and exercise routine. And remember unlike CoolSculpting™, SculpSure™ had no-downtime so you can get back to living life right away!*

Want to Finance Your SculpSure with Low Monthly Payments?

If you would like more information on the Science behind SculpSure please download this information from the SculpSure clinical trials: