Many of our patients ask us about CoolSculpting®, based on a magazine article or a billboard they have read. “Freeze the Fat: does it work?” and “Is it worth it?” are among the most common questions. As a service, we want to compare CoolSculpting to Smart Liposuction in terms of effectiveness, risks, and cost.

As per RealSelf, “CoolSculpting is non-surgical device that uses controlled cooling to destroy fat cells by freezing them, thereby eliminating unwanted fat.” 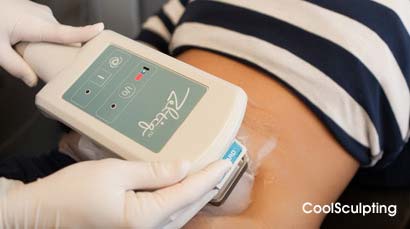 You want to lose that unwanted fat and have heard about “Freezing the Fat” with CoolSculpting. But before you schedule the procedure you need to know the facts.

CoolSculpting by ZELTIQ is designed to treat small areas of fat deposits in “trouble spots” and is only for those people with “a mild amount of extra fat whose fat deposits are localized” and it ONLY results in eventual reduction of 23% of the fat which is treated. The amount of fat treated in the large Coolculpting applicator is about the size of a stick of butter. Only 1/4 of fat treated will succumb to the Cryolypolysis (freezing the fat) process. CoolSculpting also takes 3 to 6 months to see the final result.

Research states  23% of fat treated during a  CoolSculpting treatment will eventually die and then are naturally eliminated from your body… But hold on, that leaves over 75% of the fat treated in place!  So will 23% reduction (in the small areas treated) make a difference in the way you look?   Maybe not and this is why some physicians say  ”some patients may benefit from a second treatment” because a second CoolSculpting treatment will allow you to lose another 20% of the fat in that treatment area.1 But the questions you should be asking is how many treatments do you need and on what areas, how long do treatments take and how much will it cost in total?

So here is the story, CoolSculpting  fat treated in the large applicator is described as about the size of a stick of butter which is the amount of fat which is sucked into the CoolSculpting applicator (as can be seen, the fat actually looks like a stick of butter after the treatment – see picture). Cost wise, CoolSculpting is billed per treatment cycle. Studies show 23% of fat treated eventually is reduced then the amount of fat is  just about a 1/4 stick of butter! A treatment cycle  $1300- $1500 for the large applicator which treats large areas (Stomach) and is $600 -$700 per cycle for the small applicator which treats small areas (each love handle) putting the cost for both love handles and stomach at just around $3000 for one treatment each and 23% of the treated fat reduced. If  a second round of treatments are needed that another $3000!

If you are starting to wonder how much does CoolSculpting cost for the actual amount of fat removed and how much of your fat is really going to be removed or destroyed and what will you lose and look like then read on.  You may even be beginning to wonder if you are even a good candidate for CoolSculpting.

With Dr. Neil Goodman’s Smart Liposuction 1- 2 liters of fat (1000-2000 ml) will normally be removed from the Abdomen and Love handles . This is many, many more times the fat removed.* 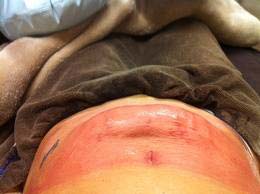 Smart Liposuction removes the fat needed to achieve the body sculpting result desired in the areas treated and unlike CoolSculpting which may remove 20% or 40% with two treatments1, With Smart Liposuction there is no waiting around for 3-6 months or coming back for a second treatment and results are dramatic. Dr, Goodman routinely performs Smart Liposuction on prior CoolSculpting patients and can show you before and after pictures of people exactly like yourself.*

If you are seeking a solution to bothersome fat deposits unresponsive to diet and exercise, SMART LIPOSUCTION works effectively and tightens your skin in the process.* CoolSculpting on the other hand has no skin tightening aspect.

New Radiance is a Joint Hospital Commission accredited facility which can remove up to 4 liters of fat during a liposuction procedure by Florida Law, most facilities are not accredited and therefore can remove only up to 1 liter during any case.1

Smartlipo laser liposuction was developed to remove unwanted fat utilizing the latest advancements in laser technology and does so at a fraction of the cost of CoolSculpting. Ounce per ounce of fat removed their is no comparison, Smart liposuction leaves CoolSculpting in the Ice Ages

Because CoolSculpting simply reduces fat in treated areas by an average of 20 percent1, it is not be a solution for those who also have loose skin. CoolScultping will not deliver the dramatic contouring results that can be provided by Smartlipo.*

Who is CoolSculpting designed for?

Patient charges for the smaller applicators (CoolCore and CoolCurve+) range from $600-750 per cycle. For the larger applicator (CoolMax), patient charges range from $1200-$1500/per cycle, similarly priced to two treatment areas with a smaller applicator. Patients average 8 treatments each, but need 10 or 12 when seeking liposuction-like results without surgery. Each treatment typically causes a 20-25% reduction in the size of the bulge treated1, but an area may be treated more than once for incremental bulge reduction. If you do the math this results in some huge costs. Liposuction-like results with 10-12 cycles at either $600-750 per cycle for the small applicator or $1200-$1500/per cycle for the larger applicator (CoolMax) is more than double the cost of Smart Liposuction with Dr Neil Goodman.

Smart liposuction, on the other hand can can sculpt the body and totally remove all unwanted fat from an area and does so at the time of the procedure PLUS it tightens skin to boot. So what should you choose?

Coolsculpting, also known as cryolipoylsis, is non-surgical device that uses controlled cooling to destroy some fat cells for body fat reduction but has no skin tightening effect. An area treated with CoolSculpting may get up to a 20% reduction of fat at the site where it is administered1 which therefore will require multiple treatments over an extended period of time. CoolSculpting results can take up to 6 months and the procedure can be costly. With Smartlipo Ultra the fat that you want removed can be physically removed from that area. You don’t have to wait months and you don’t need to come back because only 25% was removed and that was not enough to achieve the result you desired.*

If you are seeking a long-lasting solution to bothersome fat deposits unresponsive to diet and exercise, SMART LIPOSUCTION works effectively and also tightens your skin.* CoolSculpting on the other hand has no skin tightening aspect. Smartlipo laser liposuction was developed to remove unwanted fat utilizing the latest advancements in laser technology and does so at a fraction of the cost of CoolSculpting. 3 areas of Smart liposuction cost around $4000. Ounce per ounce of fat removed their is no comparision, Smartliposuction leaves CoolSculpting in the Ice Ages.*

Smart Liposuction delivers the most effective fat removal and cellulite treatment available today.* No other cosmetic surgery procedure comes close. Regain your figure now with laser body sculpting that you have to see to believe.

Smart Laser Liposuction is a procedure which has evolved. Initially, liposuction meant undergoing general anesthesia or heavy sedation in an OR, due to which the patients were at an increased risk and the procedure was costly. It also required long recovery period. But, times have changed and so has the process. Patients can now get SmartLipo and walk out the same day with little or no recovery and results are superior to Coolsculpting.*

What is Smart Liposuction?

Smart liposuction is advanced and perfected laser liposuction and offers a minimally invasive laser fat removal process that requires little to no recovery time and actually enhances and tightens your skin in the process.
Smart Liposuction removes unwanted fat utilizing the latest advancements in ultrasound and laser technology. No other cosmetic surgery procedure comes close to removing the same amount of fat with a walk-in procedure!*

If you are seeking a solution to bothersome fat deposits unresponsive to diet and exercise, Smart liposuction effectively removes fat and tightens your skin.*

The Smart liposuction procedure requires no post procedure pain medications as you will walk in and walk out and be doing light exercise the next day. Patients do not require extended recovery or overnight admission like with traditional old fashioned liposuction.*

So How Does CoolSculpting Work?

Fat is suctioned into a “paddle” and made very cold (just above freezing point), so t

cool sculptinghat fat cells become irreparably damaged. It usually takes 1-3 hours per session, most areas require multiple sessions and it takes about 2 to 4 months to see results. CoolSculpting claims 20-25% reduction of fat in the localized treatment area and does not offer any skin tightening benefits.1

Find out the 3 Myths about CoolSculpting

Myth 1: CoolSculpting  is a Quick Fix. The actual procedures only take about two hours per area (an hour on the area plus before and after) but several areas may need to be treated so time is dependent on the total number of areas but as far as results, don’t expect to walk to skinny. Patients may not see start to see results for a few months and full results, may take up to 6 months after the procedure. Many patients report that the first treatment does not produce much as far as results given that a total of 20% reduction is shown as per the research and a second course of CoolSculpting treatments are then needed.1

Myth 2: It’s NOT an eat more Food Pass. CoolSculpting freezes 20% of the fat cells in a treated area while leaving 80% of the healthy cells in that area behind.1 Increasing dietary intake will simply allow the 80% of  fat cells left behind to increase in size and replace the volume …. Basically replacing any lost fat.

Myth 3: It Will Lift the Sag, Tighten Skin and Sagging Areas. Not to be confused skin tightening technologies such as Laser liposuction, CoolSculpting simply cause some fat cells to die specified area but it will not do anything as far as lifting sagging skin. If a patient is already experiencing sag and turns to CoolSculpting the appearance of sag may become even more apparent.

Both CoolSculpting and Smartlipo will reduce fatty pockets, but the outcomes are very different. Smart Liposuction not only by reduces fat but also by creates a more curvaceous body contour.* CoolSculpting can only reduce fat in specific areas and is not a sculpting technique. Because CoolSculpting simply reduces fat in treated areas by an average of 20 percent1, it is not be a solution for those who also have loose skin. CoolScultping will not deliver the dramatic contouring results that can be provided by Smartlipo.*