Big Butts Are Back

The History and the Industry of the Superior Posterior

Kim Kardashian. Nicki Minaj. Iggy Azalea and Jennifer Lopez. What is the first thing that comes to mind when one reads these names? Okay, so the headline gave it away. These are women who are internationally famous for, among other things, their superior posteriors. 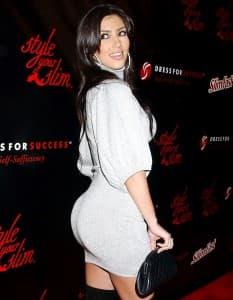 It can seem that all of a sudden shapely figures have replaced the ultra-thin look of the runway supermodel; but the appreciation of a full female form is nothing new. From Marilyn Monroe to Anna Nicole Smith, women with curves have been sex symbols. But admittedly, there was less of a focus on these women in pop culture. And while Sir Mix-A-Lot was talking about Baby having “back” back in the day, the representation of female beauty in the ’90s was less Jennifer Lopez and more Jennifer Aniston.

Why are bigger booties becoming so popular, and why now? Partly because of the way beauty trends ebb and flow, and partly biological. Big hips complemented by a small waist are an indicator of feminine fertility and physical strength. And thanks to the influence of more cultures — particularly Latino culture, claims sociologist Jean-Claude Kaufmann, but also black culture, stars like Minaj, Lopez, or Beyonce are attracting more and more attention.

Gymnasiums now advertise squat classes to firm and grow the butt. Meanwhile, cosmetic procedures are increasing to help women achieve that hourglass look. According to the American Society for Aesthetic Plastic Surgery, butt augmentation procedures have shot up 58 percent from 2013 to 2014. In particular, the Brazilian Butt Lift — named after the country that perfected the surgery (not to mention the booty) — is a transfer of fat via liposuction, and it is becoming the most popular method, over implants which can feel fake and invasive. Brazilian Butt Lifts also skyrocketed over the past year, up 58 percent from 2012.

And so the trend of plump rumps goes on. But will it last? We think so. As long as there are women who want to stand out — quite literally — among the crowd, there will be methods to help them achieve their desires, and no shortage of admirers to approve.

Interested in Butt Lift? See Before and After photos here!*

Diet for a Healthy Skin